It’s a busy day, so I’m going to make this quick, but I couldn’t let my experience last night of seeing Million Dollar Quartet at The Paramount Theatre go by without telling you about it.  It plays Seattle only through May 20th, so if you’re a fan of the early years of  rock and roll, get in there and see it this week!  This isn’t some vegas-style impersonator show – the acting and directing really shines as the show gives audiences a peek into the part of rock ‘n roll history that was Sun Records.  You get to experience a great day in history, learn about how some of music’s biggest legends got their start and dance in your seat to so many recognizable songs.

The performers all play their own instruments and really know how to rock.  I’m not very familiar with Carl Perkins, so didn’t have a lot to compare Lee Ferris’s performance to, but I can tell you he had a great voice, engaging stage presence and could really play that guitar.

Martin Kaye (above) is hilarious to watch as the green and eager Jerry Lee Lewis and comes close to stealing the show with his piano-clowing antics. I can’t decide if I want to invite over for drinks or slap in the face (maybe both?), and I’m still laughing at the moment he creates by puppeterring his microphone with his feet. If I hear of Kaye coming back to Seattle, I will definitely make a point to see whatever show he’s in.  I have a feeling a work of his own music and comedy would be a great night out. 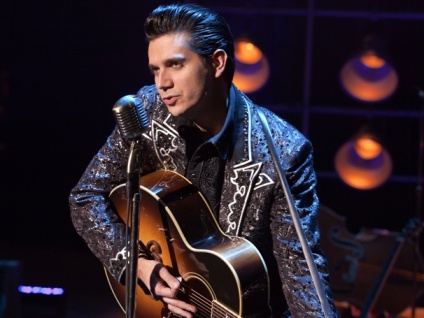 Dreamboat Derek Keeling (above) plays a great Johnny Cash. His voice is like dark chocolate (deep, delicious, smooth and irresistible) and really makes you feel like you’re listening to Cash himself. I’m pretty sure he’s more of a cutie than Cash was in life, but he does capture the essence of the legend well in his performance.

If this song list is your style of music, be sure you don’t miss this show!

Fun fact: Rob Lyons, who helped mount Million Dollar Quartet at Village Theatre and then went on to play Carl Perkins in the Broadway production will be playing the curtain call with the cast in Thursday night’s performance.

5 thoughts on “Keeling, Kaye & the cast of Million Dollar Quartet will have you dancing in your seats! Now through May 20th”