One of my best friends has been living in Madrid for a couple years and brought her boyfriend Julio (who is from Spain) back home to Washington this summer. Julio’s sister and brother in law were also able to visit Seattle for a busy weekend. Here’s Molly’s post featuring some highlights of their July adventures.

What does a Spaniard want to eat in America? Burgers. What else? Burgers. In search for the best burger in Seattle, Keridwyn steered us to Uneeda Burger in Fremont. We loved the Philly Smash and the caramelized onion & blue cheese burger. We also indulged in a less gourmet burger experience, making a late-night stop at Dick’s Drive-in, a surprisingly big hit with the Spaniards.

Molly, Keridwyn, Brandon and Julio at Uneeda Burger in Fremont

Showing my city to newcomers made me realize how much I look forward to eating Asian food in Seattle – we just don’t have the same variety in Madrid. New discoveries this trip: the steamy hand-rolled soup dumplings at Din Tai Fung in University Village and the barbecued spam musubi at Marination Ma Kai on the other end of the water taxi in West Seattle (hold on to your earrings! It turns out the water taxi is an oversized jet ski!).

Enjoying dumplings, green beans, and more at Din Tai Fung in U Village

Did you know you that the EMP Museum isn’t just about music anymore? I was pleasantly surprised to be transported into the worlds of Sci-Fi, Fantasy and Horror with the elaborate exhibits displaying Paul Allen’s movie memorabilia. My novio is a total friki (“nerd” in Madrid-speak), so he loved seeing the Terminator T-800 robot and the Dr. Who Dalek. I kept my cool until I saw the Back to the Future II hoverboards. We all had fun taking a quiz to discover our fantasy character archetypes and admiring Game of Thrones and Princess Bride costumes up close.

Tyrion Lannister costume from Game of Thrones at EMP Museum

Julio runs from a Dalek at the EMP Museum

My friend Alejandro is an engineer who has worked for the enemy (Airbus), so he couldn’t leave Seattle without visiting the Museum of Flight. I’ve been there several times, most recently in 2013, but I was amazed to see how much it has expanded and changed. The highlights for me this trip were the space exhibits, with Apollo and Space Station training modules, and touring the Boeing 787 Dreamliner. My brother-in-law Richard worked for years on the 787 flight controls – I finally got to see the results of all that labor! It’s a truly giant, futuristic-feeling airplane. No more old-fashioned window shades: an electric gel between the window panes can be adjusted by each passenger to the desired level of shade.

Maria plays pilot at the Museum of Flight

Our trip coincided with Seattle Art Museum‘s Disguise: Masks and Global African Art. The exhibit features modern Africans creating bold new multimedia art, as well as a display of more traditional masks. One of the scariest masks, “Ancient One,” has enormous fangs and claws jutting out at all angles from the face. Worn by a mediator in disputes, it served as a reminder not to solve problems like wild animals.

Photo of “Gela Mask (The Ancient One)” by @instaleahweinstein on Instagram

I’m so glad that we stopped by the Asian Art Museum in Volunteer Park, too, to see the animated mural and 3D soundscape of Chiho Aoshima. Alive with the groaning and tinkling sounds of nervous swaying skyscrapers, flying fairies of progress, and a flatulent volcano goddess, it illustrates the cycle of death and rebirth in a mesmerizing way. 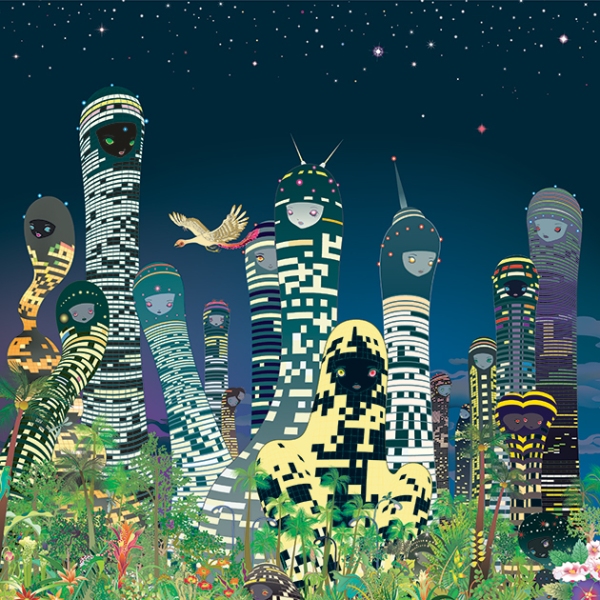 The same day, we zipped up to the 73rd floor of the Columbia Tower to the Sky View Observatory and were struck by the similarities of the Seattle vistas to Aoshima’s mural: the same lakes, skyscrapers and volcanoes, abuzz with airplanes and incoming weather fronts. Unlike the animated mural, which leaves everything up to interpretation, the Sky View Observatory walls are covered with informational displays that give meaning to each view angle. Each time I started to explain a key Seattle feature to my friends, I realized that there was a supporting display with facts and figures illustrating exactly that, from the floating bridges to the Ballard Locks and the sports stadiums. As a foreign language teacher, I seriously appreciate the visual aids! 🙂 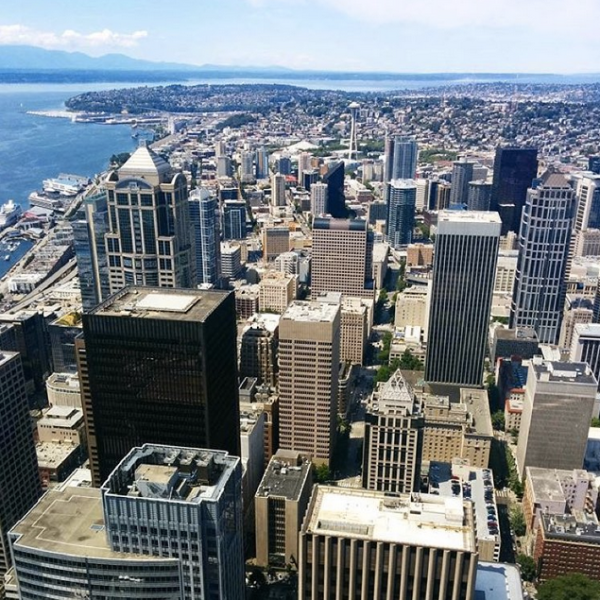 On this trip, I had the chance to see Seattle with Spanish eyes – or more aptly, with a Spanish nose. The most impressive thing for my boyfriend Julio is how “it smells like good food, everywhere, all the time!” He is also blown away by the size of the trees in city parks like Volunteer Park, and especially our “discarded” driftwood trees on the beach in Edmonds. After living in Europe for two years, I’m also shocked by the size of the cars in Seattle – and the distances that people leave between parked monsters.

If you ask Julio what the best part about Seattle is, it’s an easy answer: the burgers.

Of course no visit to Seattle is complete without a stop at Pike Place Market!